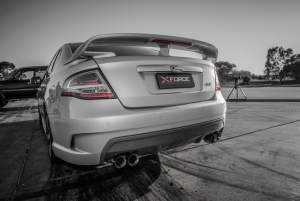 Digital, Promotion, Design, Public Relations, Case Studies
Last Sunday DBC2 made the trip up to the DECA Driver Training Facility in Shepparton to shoot a series of promotional videos for XFORCE Performance Exhausts. The day of the shoot was the result of over four months of planning, and almost everyone from the DBC2 team was involved in the project across that time.

We had 8 high performance vehicles on show including:

All vehicles had a brand new XFORCE performance exhaust fitted for the shoot. In total a team of 12 people were at the venue on Sunday to help out. Over 10 cameras were used throughout the shoot, ranging from professional broadcast quality cameras, high end slow motion camera, and mountable Go Pros.

Stay tuned for the videos. We’ll let you know as soon as they are released!