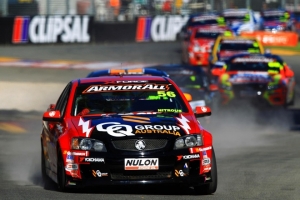 DBC2 were excited to help XFORCE, leading manufacturers of performance exhaust systems, launch their involvement with the Australian V8 Ute Racing Series at the Clipsal 500 in Adelaide over the first weekend of March.

XFORCE are the Official Exhaust and Header supplier for the V8 Utes in 2013, and DBC2 helped make sure that their presence was known at the first round of the season.

XFORCE had a promo ute set up at the event fitted with a complete XFORCE performance exhaust system, which allowed us to rev the car throughout the day to show the fans exactly how good an XFORCE exhaust can sound.

We also had a display set up in the V8 Utes paddock area where product was on display and fans could get their photos taken with the XFORCE girls.

Assets from the event over the weekend were posted throughout XFORCE’s social media channels online to ensure that the whole community around the brand stayed connected with the action on track.