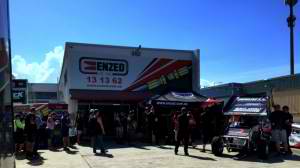 To celebrate their continued support of Australia’s only national Sprintcars series as naming rights sponsor, ENZED Brisbane hosted the official World Series Sprintcars Launch on 27th November for the 2014/15 Season.

With a free BBQ on offer, Sprintcars on display, prizes as well as driver meet and greet opportunities, it was a fantastic event to kick off the next exciting season of ENZED World Series Sprintcars.