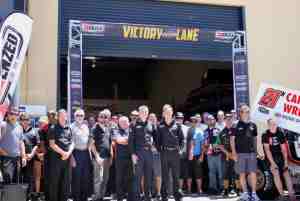 DBC2 helped Speedway Australia launch the World Series Sprintcars 2013/14 season this month, with the exciting announcement that the series will now be airing on free-to-air channel ONE.

This huge announcement for the series will enable WSS to reach a wider audience and grow their fanbase.

The launch, held at ENZED’s Wetherill Park store was a huge success, with Ten’s Motorsport Commentator Greg Rust welcoming the series to ONE, alongside WSS host Chad Neylon who co-hosted the launch.

A Sprintcar with ONE branding was unveiled to announce the TV deal. Last year’s series winner James McFadden and Sprintcar legend Garry Brazier were present at the launch to discuss the upcoming series and the exciting announcement of ONE.

Media representatives, 8 Sprintcars on display, a BBQ and some trade stands completed the launch event festivities.