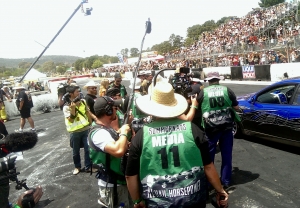 Working closely with Summernats Owners and Management, DBC2 was on site at the Street Machine Summernats 28 as the Media Management and PR team, liaising with all parties throughout the four day festival.

The Street Machine Summernats 28 proved to be another successful event, with crowds continuing to increase, this year 108,569 fans from Australia and overseas descended on Exhibition Park in Canberra.
In the event build up, DBC2 successfully executed promotion through traditional and digital means, implemented a TV advertising campaign, handled media accreditation, coordinated an event launch on the grass of  Parliament House and regularly informed the media of event highlights and announcements through media releases.

On site DBC2 managed TV crosses with Channel 9’s Today show, liaised with Police on a daily basis, organised media opportunities around the Guinness World Record Burnout, worked closely with event owner Andy Lopez and the Summernats team for daily press conferences. Ad hoc media opportunities were arranged as they presented plus DBC2 put together official event media releases on a daily basis to share the best of the event.