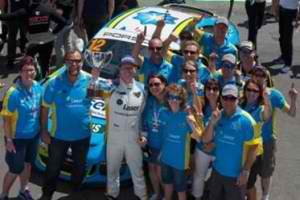 After an eventful Bathurst weekend, the championship was set for a grandstand finish, with both Steve and Warren Luff in with a chance to win, heading to the final round on the Gold Coast. Steve was 21 points behind Luff, but the team wasn’t going to give up without a fight. Qualifying second, Steve was in a strong position for the start of the weekend and ahead of his main rival Warren Luff.

Race 1 and 2 yielded second place finishes and although race three Steve finished fifth, Warren Luff had been further down the order during the weekend than the Team Laser driver, which meant Steve clinched the title for the first time.

“It’s unbelievable, there was lots of emotion and it’s a great achievement.”

“I couldn’t have done it without the support of the Laser Plumbing and Electrical team who have been fantastic all year and also BP Ultimate Diesel, Shannons Insurance, and Mosley Mining.

“I also want to thank my team at Steve Richards Motorsport.”

Steve and the Laser Team are looking forward to defending their title in 2015.