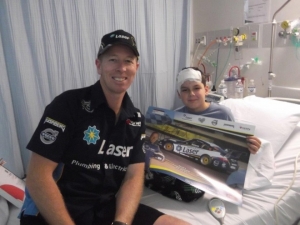 Our client Steve Richards had a big week leading up to the Sucrogen Townsville 400, which took place in early July.

On route to Townsville, Steve made a stop off for the Laser Plumbing Bundaberg and Laser Electrical Bundaberg sponsored Kart race and charity event.

Arriving in Townsville a day early, Steve paid a visit to the children’s ward at the Townsville Hospital.

The kids appreciated a poster and a chat, and it was a good way to get the race weekend started.

The Townsville Hospital Foundation thanked Steve for visiting and DBC2 for organising the visit, saying that it gives the kids a happy memory to take away from their time in hospital.

DBC2 also organised an on-air competition in Minty’s Shift on 4TO FM, Townsville, offering school kids the chance to win a drive home with Steve Richards in a Porsche on their first day back at school.

Lucky winner, 12 year old Dylan, was very excited and no doubt the envy of other children as Steve arrived at school in the Porsche. Dylan, his brother Jack and father Damien all rode home in the Porsche Cayenne.