Snap-on teams up with Honda Racing 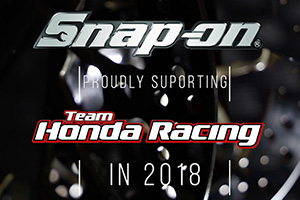 Filmed on site at the Team Honda Racing factory in Melbourne, the Honda CBR1000RR Fireblade raced in the Australian Superbike Championship by Troy Herfoss became the star of the show, along with the Snap-on tools that the team rely on at the factory and at the track.

The final video was spectacular, showcasing this new partnership and the launch video has proved to be a hit on Facebook, providing a great way to leverage the new sponsorship while engaging an important Snap-on demographic.

Catch the launch video below:

For more information on Snap-on, head to www.snapon.com.au

To find out what dbc2 can do for you visit us through the following link! https://dbc2.com.au/services/video-production/