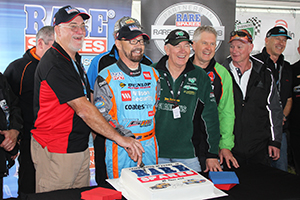 A major milestone was reached recently for another one of DBC2’s longest standing clients, Rare Spares. And to celebrate this amazing achievement, DBC2 headed down to Phillip Island Race Circuit with Rare Spares for the V8 Supercars and Touring Car Masters.

As part of the Rare Spares celebrations, DBC2 engaged in a number of activities for Rare Spares which started with a publicity activity in the form of a Men’s Shed Association BBQ, of which Rare Spares is a fundraising partner and champion for what is a great cause.

Touring Car Masters machines were sourced to attend the event to add to the spectacle for those in attendance and Rare Spares General Manager David Rayner was also in attendance.

To make an event of the celebrations, DBC2 coordinated an Anniversary party of sorts in the Touring Car Masters pits, producing a customised Rare Spares cake for the occasion plus brought John Bowe, David Rayner and the TCM family all together for a cake cutting and photo opportunities.

“We’re lucky enough to be celebrating 40 years in business and it was great to be down at Phillip Island celebrating with the Touring Car Masters people,” said David Rayner, the proud General Manager of Rare Spares.