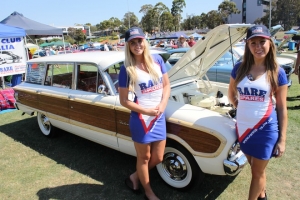 DBC2 recently helped our client Rare Spares at two major Victorian car shows; the Kiwanis All Ford Day and the annual Picnic at Hanging Rock, with a great result achieved at both shows.

Rare Spares was a gold sponsor at the 2013 Kiwanis All Ford Day, held at Deakin University in Geelong. Over 1,200 Ford Show Cars were on display, with over 30 Ford Car Club displays, private show cars, show car judging and trophies.

DBC2 helped organise an exclusive All Ford Day promotion with the chance to win a $200 Rare Spares Voucher, ran a “You’ve Been Snapped” Facebook promotion, and signed show goers up to the Rare Spares Loyalty Club.

The annual Picnic at Hanging Rock car show, presented by The Macedon Ranges & District Motor Club Inc, was a great success with a record number of vehicles, and the highest number of general visitors in the history of the event.

Holden Restoration Parts by Rare Spares ambassador and V8 Supercar icon Cameron McConville, who was at the show on behalf of Rare Spares, spent the day meeting fans and signing autographs at the Rare Spares stand.