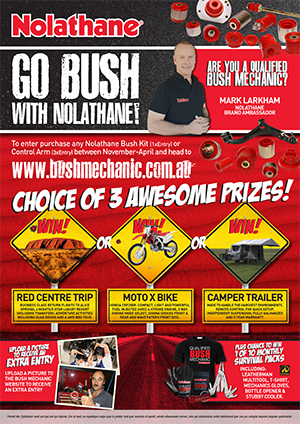 Working closely with client Nolathane, DBC2 has designed a comprehensive ‘B to B’ sales campaign focusing on Nolathane’s range of suspension bushes and control arm components.

Combining strategy into a tactical rollout, the campaign  was entitled “Go Bush With Nolathane” and encompasses print and digital media elements, a competition activation to increase engagement and build a larger database  plus apparel and a video advertisement package for online and social media promotion.

Furthermore DBC2 was able to use its vast automotive network to facilitate Mark Larkham to become brand ambassador for the campaign. Larkham is a reputable and knowledgeable man within the industry, having been a V8 Supercar driver himself, before becoming V8 Supercar technical commentator Larkham was a strategic choice.