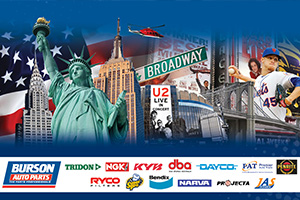 For over 44 years, Burson have been involved in the automotive trade aftermarket. With consistent efforts on continually expanding their product range, Burson also focus on providing superior, knowledgeable service to their ever-growing trade customer base.

DBC2 was called upon to assist Burson with one of their biggest promotions yet, and with months of preparation at hand, the release of the ‘Trip of A Lifetime’ promotion was unveiled.

To help with the digital launch of the promotion, DBC2 developed the Facebook launch which included detailed marketing towards Burson’s target audience. In the end, results for the promotion were outstanding as a high number of entries were achieved, as well as reaching nearly 50,000 Facebook users and providing over 5,000 engagements with the posted content.

The prize for this promotion gave customers the chance to win a trip to New York when having spent $5,000 (excluding GST) across 13 participating brands, one of the biggest prizes to date.

With the ‘Trip of A Lifetime’ promotion now done and dusted, this has been a great accomplishment for both Burson and DBC2 with outcomes produced being positive.