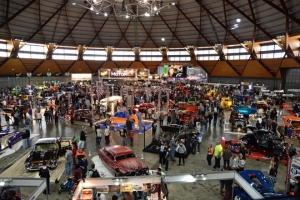 DBC2 were very proud to work with our client MotorActive over the past few months on MotorEx 13, the largest and most prestigious motoring enthusiast event of its kind in Australia, held in The Dome at Sydney Olympic Park from 19th to 21st July, 2013.

The event last weekend was a great success, with thousands of car enthusiasts witnessing one of the best showcases of Australia’s greatest custom, performance and collectable cars and bikes.

A particular highlight this year was the inclusion of American hot rod design legend Chip Foose, who was brought to the show on behalf of 3M. The feverish attention around Foose was unlike anything ever before seen at MotorEx. The lines of fans waiting to meet Chip and get items signed was relentless, and definitely brought a different energy to the show.

The addition of opening the show to the public on Friday night for the first time and holding the House Of Kolor Inauguration that night allowed fans to get a sneak peak of the show before the masses came on Saturday.

MotorEx is one of the highlights of the year for the team at DBC2, and the team at MotorActive do an incredible job organising and coordinating the show.

We’re already looking forward to MotorEx 14, which will be held for the first time at the newly refurbished Melbourne Showgrounds from 18th to 20th July, 2014.

For more information about the show visit www.motorex.com.au.