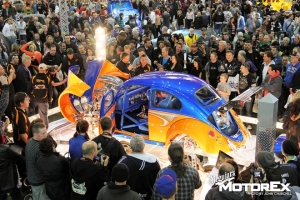 25,153 people from within NSW, interstate and overseas attended the event over Saturday and Sunday last weekend to witness a spectacular display of Australia’s greatest rides on show, including immaculate custom, performance and collectable cars.

This was a 26% increase on last year’s crowd figures at MotorEx 11, and a staggering 48% increase on MotorEx 10; the first year the show was under new ownership by Bruce Morrison and his company MotorActive.

“MotorEx 12 was easily the greatest MotorEx to date, and the show will only get better from here,” said Bruce.

“The crowd numbers proved to us that there is still a very strong custom car scene in Australia, and we are proud to be able to offer enthusiasts the opportunity to display and experience some of the best vehicles in the world in one of the best venues in Australia.

“The MotorEx 12 crowd figures are also exceptional at a time when events both within Australia and overseas are being hit with declining attendance numbers and declining profits for both the events’ exhibitors and organisers.

“We’re very excited to be up nearly 50% in attendance since we first took control of MotorEx in 2010. This proves to us that our long term strategy for MotorEx is working. We’ve got some big things planned for MotorEx next year, so stay tuned more info soon.”

A record breaking 12 stunning Super Elite show cars and three incredible new bikes were unveiled to a great response in the eagerly anticipated 2012 House of Kolour Inauguration ceremony, including Mick Fabar’s Zero’d; the world’s first ecofriendly Super-Elite muscle car. In the renowned Meguiar’s Superstars awards, showcasing the best of the best show-stopping custom vehicles in Australia, Ewan McDonald took out the Best of Breed “HOT ROD” award for his 1934 Ford Coupe ‘SR’, and Paul Bennett was awarded the Best of Breed “STREET MACHINE” award for his 1958 Borgward Goliath ‘GOLIATH’.

MotorEx and parent company MotorActive entered into a two year fundraising partnership for 2012 and 2013 with Camp Quality – the children’s family cancer charity, to help raise money through a variety of initiatives including MotorEx.

The MotorEx organisers were proud to be able to raise $43,264 for Camp Quality over the weekend, with the money going towards the charity’s vital work in creating a better life for every child living with cancer in Australia.

“Camp Quality was embraced by the motoring enthusiast community at Meguiar’s MotorEx on the weekend,” said Bronwyn Neeson, Partnerships Manager at Camp Quality.

“The Camp Quality foyer area was alive with MotorEx attendees checking out the party vibe in the Kombi limousine, having fun on the race track simulator rides, and appreciating the Streets Commodore vehicles on show. We were delighted to be at MotorEx this year as their charity partner and want to thank the event for the amazing support we received from the ticket sales, t-shirt sales and raffle fundraising that took place. MotorEx has directly enabled us to support over 50 children living with cancer.”