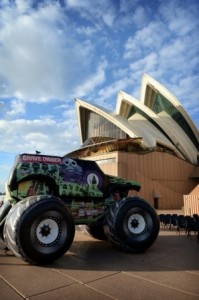 Monster Jam, one America’s biggest family entertainment stadium spectaculars, was launched on the morning of Thursday the 30th of May at the iconic Sydney Opera House to welcome the event to Sydney’s ANZ Stadium for one night only on the 19th of October.

“‘Maximum Destruction’ is coming to ANZ Stadium, but we’re not talking about next week’s State of Origin game,” Mr Stoner said.

“Monster Jam is an internationally celebrated live family event, watched by millions of people in arenas around the world and I am pleased to welcome it to NSW.

“With three metre tall and four metre wide vehicles weighing five tonnes racing in a custom-designed track full of obstacles and skill challenges, Monster Jam will be a night of action-packed entertainment.”

On the 19th of October, Feld Motor Sports and Monster Jam will transform ANZ Stadium into a mountainous and obstacle-scattered dirt pit, using over 300 truck-loads of dirt. The Monster Jam trucks will then battle it out in one of the most intense motor sports experiences on the planet.

“We’re extremely excited to be able to finally bring Monster Jam down under to our fans here is Australia,” said Michael Daynes, Regional Vice President at Feld Entertainment.

“We have been talking about bring the show down here for a number of years, and we are thrilled that it is finally happening. ANZ Stadium is the perfect venue to launch the Monster Jam experience in Australia and we know Australian families will love it.”

ANZ Stadium, Sydney’s flagship major events venue, was the ideal choice for Monster Jam, which draws crowds of over four million fans around the world each year, across more than 350 performances in over 40 different cities.

“We are looking forward to hosting Monster Jam at ANZ Stadium, and sharing one of the world’s most spectacular stadium events with Australian families,” said Daryl Kerry, Managing Director of ANZ Stadium.

Witness maximum destruction, spectacular stunts, and unbeatable entertainment for the whole family. Tickets start from $25 for kids and $40 for adults.

Tickets are on sale from Ticketek outlets, or online at www.ticketek.com.au/monsterjam. Credit card & transaction fees may apply. For more information on Monster Jam, visit www.monsterjamonline.com.au.