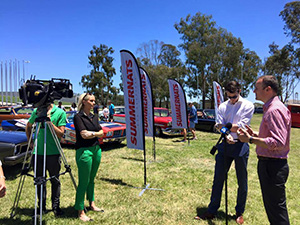 On the 4th of December, the official media launch for the biggest car festival in the Southern Hemisphere, Summernats, was held on the steps of Parliament House, Canberra.  The event was planned and managed by DBC2 in conjunction with the Summernats team.

Along with some prime examples of the types of machinery spectators can expect to see at the event, Chief Minister Andrew Barr was there to speak about the significant financial contribution Summernats makes to Canberra. In addition, Summernats owner Andy Lopez also spoke about what visitors could experience at what is DBC2’s largest event of the year!

There to see that the DBC2 managed event went off without a hitch was our very own ‘Jumpin’ Jos Roder.

DBC2 were able to ensure a number of major TV Networks were on site to provide prime coverage and exposure ahead of the event in January.

DBC2 are also responsible for the promotion, media and Public Relations aspects of Summernats, which is an event not to be missed. A four day party of muscle cars, music and entertainment, the Summernats is an event every Australian should put on their bucket list, every single year.