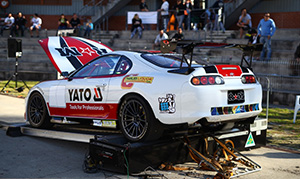 Horsepower aficionados have been campaigning for a national dyno competition for some years.  Thanks to a key collaboration between Dynotech, MotorEx Cruise for Charity and Summernats, this aspiration is now a reality, with the launch of the Dynotech Hunt for Horsepower Heroes.

This national competition will run in conjunction with MotorEx Cruise for Charity events across the country, with five rounds slated for 2015 and all funds raised going to support Cruise for Charity’s designated charity – Camp Quality.

In  2015 events will take place in Townsville, Sydney, Melbourne, Adelaide and Perth, covering the five mainland states, with horsepower fanatics now able to push the limits of their vehicles in a safe, controlled environment, all the while supporting kids in need.

The aim is to develop a national 2WD vehicle competition for street legal and street registered vehicles culminating in the national final being held at Summernats that will refocus engine development and performance with the average ‘Joe and Jill Public’ car owner.