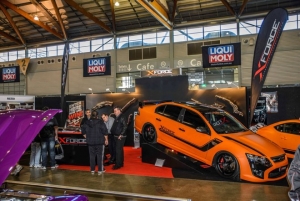 XFORCE, leading manufacturer of high quality performance exhaust systems, were one of the major sponsors at MotorEx 13 in Sydney last weekend, and DBC2 were thrilled to be able to help maximise their sponsorship and deliver value at the event.

XFORCE were located front and centre at the back hall of the show behind The Dome, just next to the Foose 3M stand, which resulted in a constant stream of foot traffic passing by the stand.

With high grade stainless steel product and a stand that looked as good as what was on the XFORCE display, the interest from show punters was relentless.

XFORCE were the naming rights sponsor of the XFORCE Real Street Boulevard at the event, which featured over 140 of NSW’s hottest real street vehicles on display outside The Dome.

DBC2 were responsible for organising the build of the display stand for XFORCE and coordinating the promotional activation at the event.

A Win 1 of 3 Performance Exhaust Systems promotion was developed by the marketing team at DBC2 to drive foot traffic to the stand at the event. Two iPad kiosks were set up at the stand for show goers to enter their details to go in the running for the chance to win.