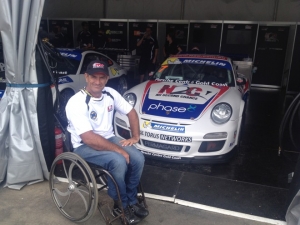 DBC2 are proud to announce a partnership with the inspiring Matt Speakman, the world’s first paraplegic to race in a major motorsport series.

Matt is partnering with us to communicate his incredible achievements, raise awareness of research being conducted on spinal injuries and help in his quest to drive at the elite level in motorsport.

Paralysed from the waist down, Speakman was left with a severe spinal cord injury after a drunk driver struck his motorcycle in 1993 and killed his passenger.

Met with an unfortunate focus on his disabilities, rather than abilities, Speakman spent 18 years trying to secure a circuit racing license. It wasn’t until 2011, after consistently campaigning and successfully passing emergency evacuation tests and medical assessments, that the Confederation of Australian Motorsport (CAMS) granted him this license. This was the first time in Australia that a paraplegic had been granted a circuit racing license.

“My recent signing with DBC2 is incredibly exciting. Thinking way back to when I had my accident, laying in intensive care with my body and racing career in tatters, it was a far off dream to make a return to national level motorsport,” said Speakman.

“The next step to continue my Journey is to become a full-time professional driver and make a career out of my passion, and by signing with DBC2 the dream will hopefully soon be a reality.”