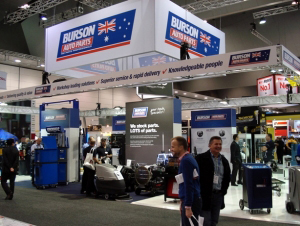 Once again Melbourne hosted the AAAA (Australian Auto Aftermarket Association) show and in 2015 DBC2 was engaged to design and build trade stands for clients AzNew and Burson Auto Parts.

The brief from Burson’s was to design a trade site which focussed on their brand, its 2015 offering and its growing stature in the retail parts supply space. Some automotive product was displayed, but it was the Burson brand that stood front and centre. DBC2 delivered on the brief and the feedback from both the Burson team and other stands was positive across the three day event.

AzNew, an Australian owned and operated fuel systems company briefed DBC2 in designing and building a space which highlighted their unique range of products and also gave their representatives and potential clients a place a to talk and discuss business. After two months of hard work the AzNew site came to life and worked exactly to plan with AzNew gaining plenty of new leads and enjoying a place to foster on going relationships.